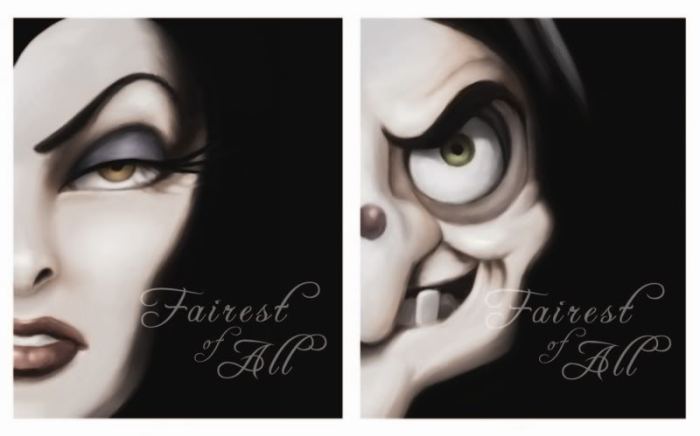 In keeping with my Cinderella post the other day, this weekend I went with my three teens (two girls and a boy) to see the new film Snow White and the Huntsman yesterday on another rainy summer day in London.  This is a beautifully filmed, well acted and cleverly scripted reimagining of the already multiply reimagined story of Snow White and this time – Snow White can kick ass!  And she doesn’t cook and clean for dwarves any more, either.  In fact, this Snow White, despite her tenure locked up in a tower seems to have kept herself remarkably fit.  No sooner does she escape the tower than she rides bare-back on a beautiful white horse (by herself – no man has rescued her) until she reaches the dark forest where she hides from the Evil Queen, her stepmother.  The Queen is evil, we are shown, because of men’s cruelty, which suggests that she is not only evil and single but also bitter against men which Snow White (as her name tells you) is not.  And it is this part of the story that is depressingly unchanged, though the Queen and the magic she wields are carefully portrayed and visually stunning.  Charlize Theron is the Evil Queen (I guess by Hollywood terms she is middle aged) and she needs the hearts and living breath of weak young beautiful things (birds and supermodels like Lily Cole who also appears here) to sustain her power.

Her magic mirror is a cruel thing, telling her the sad truth that being Charlize Theron just isn’t good enough once Kirsten Stewart comes along.  Despite making clever, evocative use of the feminine symbols of drops of blood predicting childbirth and also death, of luscious apples that are also, of course, poisonous, the movie, like the German fairy tale the Grimms and later Disney based their version on, shamelessly pits older women against younger, stepmother against stepdaughter.  (For full disclosure I should point out that I am a stepmother to two of the teens I mentioned, so am sensitive to such portrayals, though less sympathetic with Charlize’s sorrow when she saw her wrinkles. In fact even at the end of the movie when she was dead she still looked better than I do in the morning.) The lust with which Snow White, dressed as a solidier, assassinates this wise, magical, powerful (but childless and so somehow apparently not quite right emotionally)female figure made it seem as if she was, in reality, killing off the feminine within herself. And this was all a bit – well, sickening to me. I had hoped that Snow White and the Queen could find a new way to run the kingdom together.  That they could work out some way for both of them to be immortal without having to consume all those nice girls to do so (maybe Kirsten Stewart could ask that vampire boyfriend of hers for advice here?) It just seemed that this new, kick-ass Snow White instead of embracing and perhaps learning to use the Queen’s power (and by extension, Snow White’s own female power) for good instead of evil, turned too quickly back into traditionally patriarchal ways of settling disputes (ie, inciting your kingdom into war, dressing up in armour and riding a horse into battle, and then inserting a sharp knife into the heart of your opponent).  Surely it was short sighted not to have taken the Queen prisoner at least, found out some of her magic spells?  But it wasn’t really that kind of power that Snow White wanted, was it?  No.  She is happy to be able to tame woodland creatures and capture the hearts of dwarves and men.  In fact, just like Katniss in The Hunger Games and Kirsten herself as Bella in the Twilight Series, Snow White as modern heroine has little interest in diplomacy or good governance, but can kick ass and has at least two men in love with her. The fact that she will, more or less inevitably, break one of their hearts is okay in this context – the point is that they won’t break hers so she won’t become a single bitter woman which is inherently evil (see Queen, above).  Is that progress from Disney and Grimm’s passive princess saved by her skills with domestic chores and her obvious ability to attract true love’s kiss?  Or is it just a trade up (bows and arrows instead of laundry, two suitors instead of one)?  My own sense is that our new Snow White is just the same as the old one but with better hand-eye coordination.  And that’s why the Queen hates her so.  Just when she has Snow White in her clutches, Charlize says something like “I am doing you a favour.  Now you will never know what it feels like to get old!” The moral being I guess that there is no greater horror to be visited upon humanity than to be an old woman.  Even if you look like Charlize.